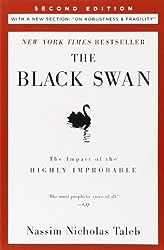 “The Black Swan: The Impact of the Highly Improbable” by Nassim Nicholas Taleb was an intriguing book on an important topic.  It focuses on the disproportionate impact of rare and unpredictable “outlier” events as well as our tendency to find simplistic explanations.

Taleb explains that most of what we read in the news is worthless because the supposedly objective journalists feel compelled to attribute causes where, in fact, they cannot know the cause.  He also explains how statistics are often misused to create a false sense of certainty. One funny example is “The Turkey Problem” in which every day he is well fed the turkey becomes more convinced that he will be safe while, in reality, he is another day closer to Thanksgiving.  Another key point is that our intuition of problems follows a normal distribution, despite the reality that many types of problems have a “long tail”.

Given the significant limits to what we truly can know, I appreciate that Taleb suggests some things we can do to move forward.  it takes some thought to apply his “Venture Capitalist Approach”, but it is better than the alternatives (i.e. basing decisions on no data or basing decisions on false assumptions).

I didn’t care for the way Taleb mixed fiction with his opinions and statements of fact, though that may appeal to others.  Also, I had to get over the author’s arrogance, explaining how much money he had made and how he wasn’t going to bother proving his case.  All that said, the book is worth the effort.

As a wonderful bit of serendipity, an author I greatly respect, the Nobel Prize winning psychologist Daniel Kahneman, wrote “The Black Swan changed my view of how the world works.”  That is a big endorsement.